I found out about the It's a Small World T-shirt contest over at Threadless about 4 hours before the deadline. I wasn't going to enter but I had an idea I wanted to get out there.

The background: It's a world of "Hello"s and a world of "Goodbye"s with this fun and educational shirt inspired by the end of the "it's a small world" ride, where boaters are wished goodbye at the end of their voyage in several different languages. The front of the shirt welcomes others in many different languages while the back wishes a fond goodbye. 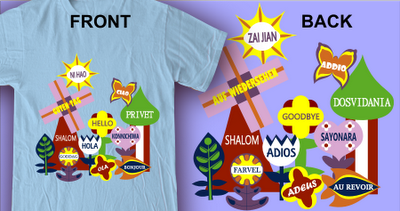