I recently found myself addicted to the Muppet Vinylmations sold at The Disney Store and Disney Theme Parks. Now that I've pretty much completed the Muppet series though (with the exception of that dang elusive Kermit), I realized something: I want more. And no, not just other Disney sets. I want more Muppets.

So, not knowing if there was a Muppet Series 3 on the horizon, I thought I would make up my own. I tried to take perceived printing limitations into consideration as well (which is why the Newsman doesn't have a plaid jacket). This was actually a lot of fun. I've already got a bunch of ideas for future series. Enjoy! 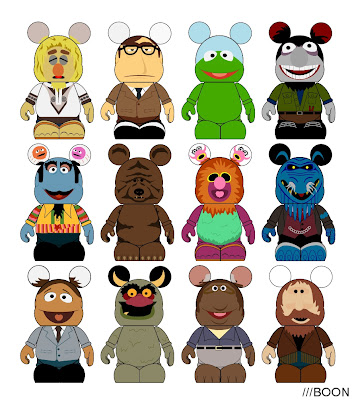 By the way, I envisioned Jim Henson as the chaser (when I first did this, I didn't realize that Disney may not own the rights to the Jim Muppet from The Muppet Show). Also, I didn't add it here, but Beauregard could use a hat as an accessory.
Posted by mbaboon