After such a strong positive response to my proposal for Muppet Vinylmation Series 3, it was only a matter of time before I got through some designs for a Series 4. 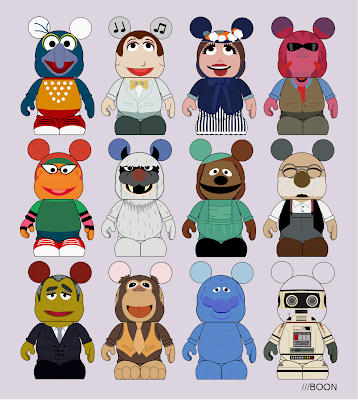 Originally I pictured the adult Skeeter as the chaser, but once I designed '80s Robot, I knew he would be the better choice. He would be printed on a clear mold like Waldo was in Series 1.

Also, I never would have imagined putting Wayne and Wanda on here (after all, I once considered them X-Muppets in the alphabet), but after seeing them prominently in the trailers for The Muppets and the OK Go video, I knew it was time for them to shine.

It says something about the scope of the Muppet universe knowing that I'm considering at least two other full sets of Muppet Vinylmation (in other words, stay tuned!) and in neither case do I feel like I'm scraping the bottom of the barrel.

A big thanks goes out to Ryan Dosier at The Muppet Mindset for featuring my work and the exclusive first look at this series.
Posted by mbaboon