Follow your nose to the Breakfast Mascot Alphabet. It's Gr-r-reat!!!

Who doesn't love sugary sweet cereal for breakfast (well, besides moms everywhere). I wanted to pay tribute to these memorable mascots with this magically delicious design. 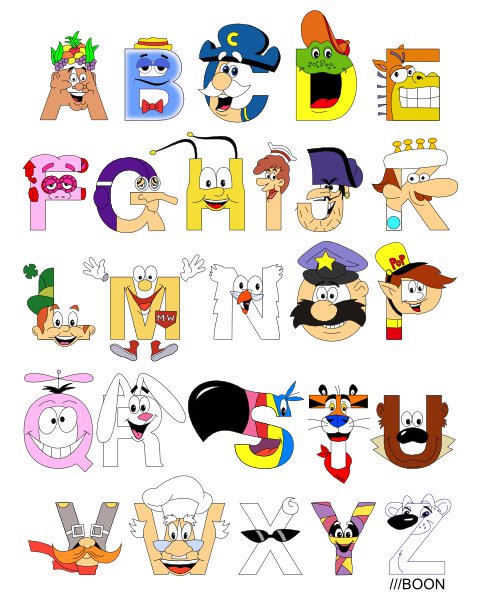 This was a lot of fun and left me craving some of the cereals of my youth. I tried to restrict it only to animated characters who were designed specifically to sell cereals. Given the abundance of characters whose names start with C and S, though, I had to make some unfortunate cuts. Sorry to Sugar Bear (Sugar Crisp), Count Chocula, Sonny the Cocoa Bird (Cocoa Puffs), Cornelius Rooster (Corn Flakes), Snap and Crackle (Rice Krispies), Chip the Wolf (Cinnamon Toast Crunch) and Sunny (Raisin Bran). And yes, I cheated a little with Buzz Bee. He was too iconic to eliminate in favor of some of the others I was considering for H.